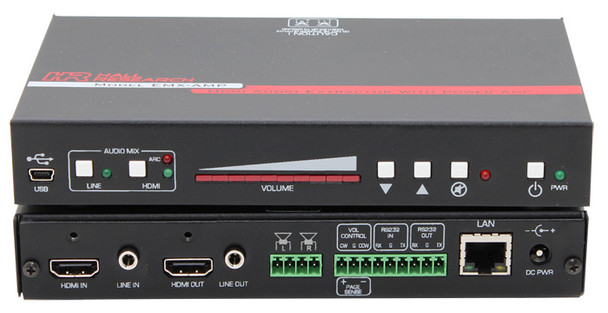 The EMX-I-AMP is a 4K HDMI Audio Extractor with built-in 50 watt audio amplifier for direct connection of 8 ohm speakers. It provides an additional line-level stereo audio input that can be mixed with the HDMI audio. The built in WebGUI can control the basic functions of this model via LAN. Volume can also be controlled using front panel buttons, RS-232 commands, or via an external rotary digital encoder. An independent RS-232 output port can be used to control other devices.

IP control adds Telnet and a WebGUI. This gives the user the ability to control the device through a PC or Smartphone. Telnet control uses the same commands as the serial interface.You can power the device on and off, select the Audio Mix, control volume up/down/mute functions, and if you have programmed RS-232 ON and OFF commands for your display, you can also control the power of the TV (or set it for Auto where the commands are automatically sent based on video detection).

The webpage has buttons and indicators that show the state of that feature. The indicators are active even if buttons are disabled.

The EMX-I-AMP can pass commands from its RS-232 input to the RS-232 output. It also has the ability to store user defined ON and OFF commands for controlling devices connected to its RS-232 output (e.g. to control power on/off function of display). The stored RS-232 commands can be triggered automatically (based on detecting HDMI input) or manually by user command (RS-232), or contact closure.

Full EDID management is provided with the ability to learn, download, upload, emulate or pass-thru the EDID from the connected display. A USB port is featured on the front panel that can be used to configure the device operation via a free Windows™ GUI available from the Downloads tab.

Hall Research guarantees that the supplied equipment is free from defective workmanship and materials. Subject to the agreements set forth, Hall Research will repair or replace, at its option, the defective components for a period of 3 years from the date of purchase if purchased after January 1st, 2016. Equipment purchased before January 1st, 2016 have a 2 year warranty. Warranty is void if item is subject to improper use, negligence, or unauthorized modification. All products Hall Research sells have no user serviceable parts inside. Opening the unit without written permission from Hall Research will void the warranty.
View AllClose

MSRP:
Now: $116.00
Was:
Anchor Audio Wired Handheld Mic MIC-90 Includes 20ft cable (XLR) Description In an effort to provide the best and most reliable audio systems, Anchor Audio is moving away from the 500...

MSRP:
Now: $1,091.55
Was:
Hall Research HDMI on HDBaseT™ 1x3 Splitter Overview The UHBX-3S is an HDMI splitter with one local HDMI output and 3 HDBaseT™ outputs for extension to compatible receivers up...

MSRP:
Now: $541.50
Was:
Hall Research EX-HDU HDMI and USB Extension on CAT6 with Audio and Integrated Control Overview The EX-HDU is used to extend HDMI video and USB data on a single Cat6 cable up to 200...

MSRP:
Now: $1,116.25
Was:
Hall Research VGA, HDMI, MHL Auto-Switching Wall-Plate with HDBaseT Overview The UHBX-SW3 is a kit comprised of a multi-input wall-plate sender and an HDBaseT™ receiver. The...

MSRP:
Now: $237.00
Was:
Anchor Audio WB-LINK Wireless Belt Pack Transmitter (1.9 GHz) Description In an effort to provide the best and most reliable audio systems, Anchor Audio is moving away from the 500 MHz...

MSRP:
Now: $375.00
Was: $498.00
The ELMO Huddle Space Collaboration Hub is a perfect solution for 1:1 and BYOD classrooms. It’s a simple 8 HDMI input connection source equipped with video and audio recording allowing you to...