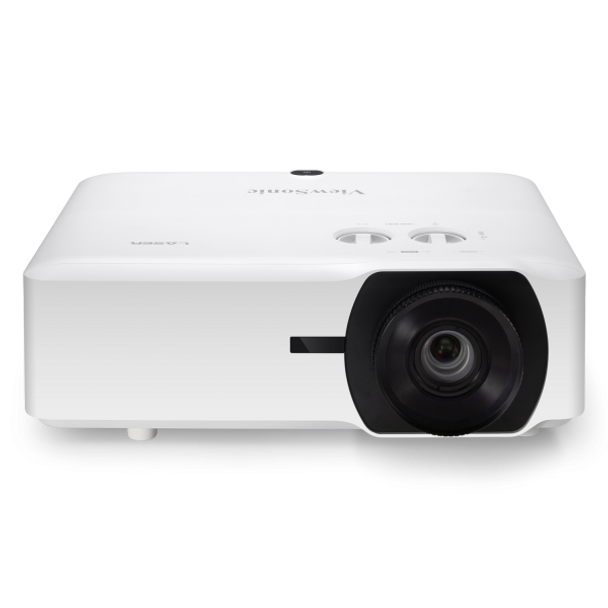 Enjoy bright images in most environments with the ViewSonic LS850WU 5000-Lumen WUXGA Laser DLP Projector.  Its 5000 lumens of brightness can overcome ambient light in many situations, making it well suited for presentation areas such as boardrooms and classrooms.  The WUXGA 1920 x 1200 native resolution is suitable for displaying many file and document types.  The projector's 1.36 to 2.18:1 throw ratio allows you to place it relatively far from your projection surface to provide versatile installation.

The LS850WU has two HDMI inputs for connecting digital high-definition sources such as Blu-ray players and HD cable/satellite boxes.  The projector also has a VGA input for analog sources, plus an RCA composite video and S-video input.  Its HDMI inputs are 3D-capable for viewing 3D Blu-ray discs with other compatible equipment, which is available separately.  An HDBaseT port lets you run a single RJ45 cable to provide uncompressed audio and HD video over long distances.  A VGA output allows daisy-chaining of multiple projectors or displays.  The LS850WU includes a VGA cable and an IR remote control as an added convenience.

MSRP:
Now: $1,829.00
Was: $1,929.99
ViewSonic Pro9800WUL WUXGA Projector Overview Bright and versatile for any professional installation, the ViewSonic® Pro9800WUL WUXGA projector delivers everything you need for big screens in...