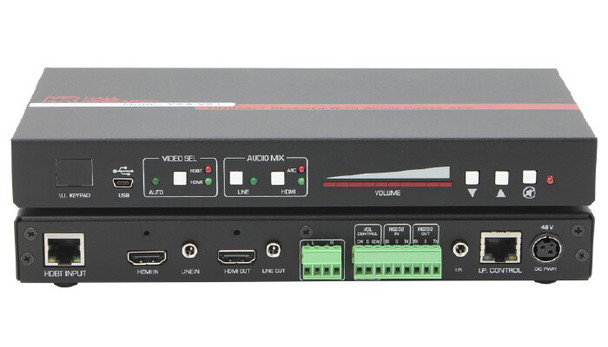 The VSA-X21 is an award winning HDBaseT Receiver with 50watt audio amp. It includes a flexible embedded WebGUI that can be used to select inputs, control volume, turn the display power on/off, and more. VSA-X21 can directly drive 8 ohm speakers and is compatible with any HDBaseT compliant sender such as the UHBX-S-WP wall plate HDMI sender, or the UHBX-SW3-S sender with multiple HDMI and VGA inputs. "Long-Reach" mode allows Cat6 cable lengths to 150 meters.

For mixing audio from other audio sources such as microphones, a separate audio input is provided.  It can also control other devices such as projectors via RS232 or LAN. A configurable WebGUI is embedded that lets users create, name and assign functions to virtual buttons on a control page. It also supports connection to physical keypad VSA-UI-DP for control.  Advanced features include: auto display On/Off control, auto input selection, priority page mute, HDMI audio ducking, L/R stereo to mono mixer, and ARC audio support.

For mounting under a desk on in a projector vault, a pair of brackets (F10341-KIT) are included with the product. The brackets can be mounted two ways, with the "L" flange pointing outward or tucked under the device (for tight spaces) as shown in examples below.

MSRP:
Now: $517.28
Was:
Hall Research SC-3H Multi-Format Presentation Switcher and RS-232 Controller Overview The SC-3H is a multi-format switcher with 2 HDMI and 1 VGA (with audio) inputs. The SC-3H provides an HDMI...

MSRP:
Now: $1,339.17
Was:
Hall Technologies ECHO-4S 4 Channel HDBaseT Splitter Overview The ECHO family is a series of extension products designed to allow a single HDMI 2.0 source to display remotely at up to eight...

MSRP:
Now: $913.85
Was:
Hall Technologies UHBX-SW3-S VGA, HDMI, Auto-Switching Wall-Plate with HDBaseT Overview  The UHBX-SW3 is a kit comprised of a multi-input wall-plate sender and an HDBaseT™ receiver...

MSRP:
Now: $1,339.17
Was:
Hall Technologies ECHO-4S 4 Channel HDBaseT Splitter Overview The ECHO family is a series of extension products designed to allow a single HDMI 2.0 source to display remotely at up to eight...